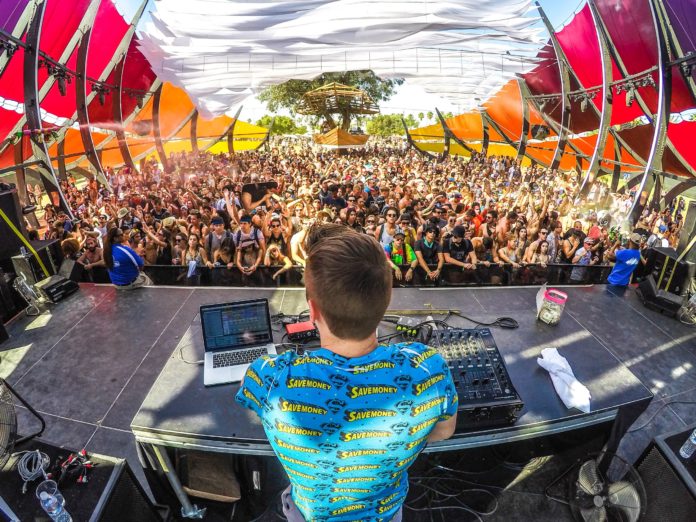 Hey there! I’m Siebert, one of the new interns at Loop. I’ll be responsible for inbound traffic. So there’s no better way to introduce myself than with a blog post!

Music inspires not only our earplugs, but all us here at Loop. Let me take you on a ride through my music tastes throughout the years.

Born on 23 December 1994 (dangerously close to Christmas when it comes to receiving presents), I was about 10 when I bought my first album. Monkey Business, by The Black Eyed Peas. Yeah. Even better; I only bought it for the very first track on the album, Pump It. Pressing rewind as soon as the song was over… I don’t think I ever heard the full album.

Still, Pump It got the hype going back then. I remember my whole class singing this in elementary school. Good times.

So, Will.i.am, Fergie and the rest of their gang had the honor of being on my first purchased CD (you’re welcome guys).

I also remember listening to a bunch of theme songs from my favorite TV shows back in the day. Which involved wanting to be ‘the very best like no one ever was’. I’m looking at you, Ash Ketchum.

Let’s fast forward a few years, straight into high school. By this time, I had gotten tired of the Pump It chorus, so the Peas were out of business (cringeworthy pun intended). As for that other song, who am I kidding? Whenever the Pokémon Theme comes on, everyone sings along.

I remember 2010 as the year I started going out. It was the summer before my sixteenth birthday. All my friends were already attending parties during the weekend, so it was about time for me to catch up.

Around that time, I had also discovered a drum and bass band through some random videos on YouTube. Luckily the song contained the now legendary words ‘it’s drum and bass’. Otherwise I would’ve never known what genre I was listening to.

To this day, Blood Sugar by Pendulum remains one of my favorite songs of all time. I honestly thought I had discovered some underground stuff, only to hear the track on my very first party. I was sold, and for years to come I would rave so hard whenever the DJ dropped this heavy hitter.

No mention of high school is complete without a little bit of rock. It’s no secret that I also listened to the likes of Blink-182, Sum 41, and so on. I like to refer to it as “American Pie Rock”. Sometimes you need some pumping guitars and rebellious lyrics to cater to those teenage drifts. What’s my age again?

So, I had discovered the power of electronic music in high school. For a few years, I was into drum and bass and saw the popularity of dubstep rise. Attending dedicated dubstep parties was no exception.

The years progressed and different music genres came and went. After some time, I got into different kinds of house music.

Of course, drum and bass and dubstep are, by definition, EDM. Still, I can’t help but think of thumping 128-bpm beats whenever the term gets tossed around.

For quite some time, it was pretty much all I listened to. I’m pretty sure my heartrate was exactly 128 bpm every time we went out.

Something that definitely helped me develop my love for the genre was an event in 2012. I remember getting a call from a good friend, saying that he “got in”. He asked me if I would like to come to Tomorrowland with him. I (and I still can’t believe it) had never heard of it, having only attended one other festival once at that moment. After a moment of hesitation, I said “yeah, sure, why not”. You cannot believe how I felt when I first set foot on those festival grounds in Boom that summer.

This year, I’m attending the festival for the sixth time. Which means I’ve been lucky enough to go there every year since that moment in 2012. Every edition is, of course, awesome. But nothing tops the feeling of seeing a Tomorrowland mainstage for the very first time!

It’s all fun and games….

Listening to music and attending festivals is great fun. But let’s not forget I also had to try and make something of myself during the year.

After I graduated high school, I went on to study Applied Economic Sciences at the University of Antwerp. Fancy words, unlike my grades during that period.

Essentially, I completely fucked up my first two years. But, it gave me a way better idea of where I wanted to go. So, I switched schools and started studying Marketing. One of the better decisions of my life, actually.

Life was better here, and during my second year I applied to join a student organization called SINC. It promotes entrepreneurship among the students of Antwerp. I got the chance to join as a communication manager, and have held that title for the past year. To start off a new year, SINC organizes a big kickoff event. It was after this event that my colleagues came up to me, holding a piece of paper. “We met a startup that’s looking for a marketing intern. Here’s all the info”.

That startup was Loop. Maarten, our founding father, had asked people if they knew any good potential interns. One phone call and one meeting later, I was bound to join the Loop team!

Are you on the level?

So here we are, March 2017, and I’ve started my internship at Loop. I love it so far; it’s the perfect fusion between an entrepreneurial vibe and a passion for music. I’ll be here till June, so expect to read a lot more from me!

About my current taste in music, there’s not one specific genre I listen to anymore. I’ve liked a lot of different stuff over the years, and still like most of it. I am convinced I can enjoy music from almost every single genre out there. As long as it’s high quality, fits the mood, or just fucking rocks.

I actually take a lot of pride in this. People who generally dislike everything except for their own favorites are pretty close-minded. Anyway, I’ll leave you with my current favorite song. But be warned: it’s nothing like Tomorrowland this time. Siebert out!

How to choose the best earplugs for concerts and music?

That awkward moment your night turns into the Schlagerfestival

How to choose the best earplugs for concerts and music?

How to throw a great House Party

How to get into Berlin clubs?

Listening to Gigi d’Agostino, Daft Punk and breakcore paid off.

From Cradle to Concert